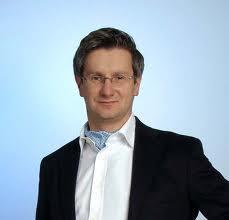 Germany’s foreign minister, Sigmar Gabriel, is continuing with his attacks on America. At the Munich Security Conference, he explained at length that Europe must not allow itself to be divided by anyone and warned the US not to try to tear it apart.
The plastic comparison of Europe to a vegetarian who will find things difficult in a world of meat-eaters, which was used to justify the need for European military engagement in the world, inevitably brings us to another confirmed vegetarian, a former resident of Munich and dove of peace: Adolf Hitler.
German historians believe that the Munich Conference and Agreement of 1938 merely delayed the war. At the moment, all we can cling to is the hope that this year’s security conference will not be followed, as the previous one was, by an agreement. I fear, however, that the discussions about the new role that Germany feels compelled to play in the world, of viewing Washington’s policy as one that cannot be relied on and one that seeks to divide Europe, will confirm Munich’s tradition of presaging the next war. Through his harsh criticism of the US in the city of beer halls and political conferences, Foreign Minister Sigmar Gabriel is paying pious homage to the propagandistic tradition of Hitler’s diplomacy of yesteryear.

But let us consider what defines this tradition.

The Bavarian capital was the place where the young Hitler used to groom his mustache, after heated discussions over a tankard of beer, with his political poem about Germany’s imperial purpose and the cut of military uniforms. Soon afterwards, Hitler became chancellor, and his fascination with a Europe united through annexation was indulged at the Munich Conference of 1938. There, the mustachioed vegetarian persuaded the British and the French that part of Czechoslovakia should be given to him.

Another indication that this is a tradition is the stance of the Reich’s last foreign minister, the talented Joachim von Ribbentrop. His recommendations for propaganda look as if they could have been uttered five minutes ago. On April 5, 1943, Ribbentrop suggested that a “Europe Committee” should be created and that the countries of the Old Continent should be united behind the armor of the Wehrmacht, with no American or British intervention. One of his arguments was that Washington had no reason to oppose the creation of the United States of Europe since the Americans, too, had been unified.

After the noose tied around his neck in Nuremberg deprived Ribbentrop of the chance to see the US accept the unification of post-war Europe under German leadership, Berlin is now continuing the tradition of National Socialist anti-Americanism. Both Gabriel and Ribbentrop speak of European values worthy of being defended through unity – but under a German aegis.

As Ribbentrop saw it, his united Europe, occupied by Hitler, was a tool that could be used to weaken the Americans’ battle morale, because they would be viewed not as liberators, but as enemies of the continent’s solidarity.

Whenever it humiliates Europe through the way in which it imposes its own ideology of integration, with a Panzer tank lovingly dressed up as a pink unicorn, Germany looks for a scapegoat. More or less the same one. Just as it did in the past, Berlin is now undertaking a thoroughly transcendental mission of uniting Europe under the eagle’s wing and protecting the poor Old Continent from an imaginary American enemy that would sabotage its cohesion.

The desire to establish a European Reich under a German boot heel will never go away, but the justifications used for it are not only false, but also just as ostensibly laudable as those of Bula, the stock character of Romanian jokes who walks an old lady across the road against her will.

Sigmar Gabriel and Joachim von Ribbentrop have both sought to further Germany’s interests through a long-term and perfidious anti-Americanism, so the conferences in Munich about the unreliability of neighbors will probably be attributed to fate. It all seems logical and simple, except for one small observation: von Ribbentrop made his fortune by trading wines, whereas Munich is the city of beer. Cheers!

The author had a doctorate in economics, and is a Romanian and German citizen.He is an editorialist for Cotidianul (Bucharest/Romania).

Why is Romania’s president refusing to relocate the embassy to Jerusa...
Scroll to top